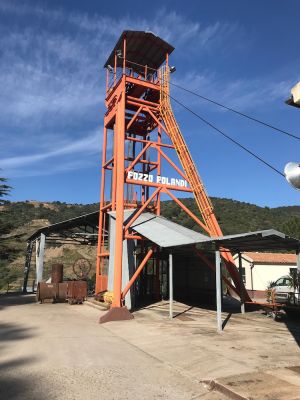 The mine as it appears today.

In the European context, Sardinia is known for its very low seismic hazard and low population density, providing a suitable environment for measurements in a stable low seismic noise environments as required by gravitational wave interferometers. In fact, as opposed to continental Italy and most of the Mediterranean basin, Sardinia has long been known to be seismically quiet because it is not involved in present-day geodynamics. Moreover, Sardinia is scarcely populated: the average population density of the region is about 70/km2, well below the Italian (195/km2) and European (112/km2) average. This guarantees a very low background seismic ambient noise caused by human activities. For these reasons, in 2011 the Einstein Telescope science team identified the mine of Sos Enattos, located about 30 km not-east of the city of Nuoro, as one of the candidate sites to host Einstein Telescope.

A survey in seismic catalogues also confirms the very low seismicity of the site: between 1980 and 2020, only 51 events were recorded within 170 km from the mine. Of these events, only 10 were recorded at less than 50 km from Sos Enattos, all with a magnitude less than 2.5. Furthermore, the population density within 10 km from Sos Enattos is only about 13/km2 and there are no major railways, highways, large industrial or agricultural plants in a range of tens of kilometers from the site. It is likely that anthropic noise at Sos Enattos is limited to very local activities which, to our knowledge, only include mine maintenance (vehicles driving at the site, lorries unloading their cargo, active water pumps, miners inspecting the site) and, possibly, farming activities in the nearby fields and pastures. All these activities can be controlled and would be interrupted when ET will become operational.

The Sos Enattos mine has been known to be active since the Roman age, when the first shafts and tunnels were excavated. Relics of the infrastructures dating back to the Roman age were present at the mine until the 1960s, when the intensive exploitation of the site erased any trace of its past. Today, the Sos Enattos mine is no longer active and most of its tunnels closed but it is still manned for environmental safety. Sos Enattos is also part of the Parco geominerario storico ed ambientale della Sardegna, devoted to preserve the memory of the mining past of Sardinia, also acknowledged by UNESCO.

Since Sos Enattos was chosen as one of the candidate sites to host Einstein Telescope, the former mine has been the target of several measurement campaigns aimed at characterizing the geophysical characteristics of the site and to evaluate if they are compliant with the requirements of the Einstein Telescope design. For this purpose, four permanent seismic stations were deployed at the site with other temporary instruments devoted at characterizing the surrounding environment both on the surface and underground. The last measurement campaign started in March 2019 and it is expected to last until early 2021. The results of the first year of this campaign are expected to be published by the end of 2020. Furthermore, since 2018, Sos Enattos hosts SAR-GRAV, a laboratory for fundamental physics research in low ambient noise environments that also provides a research and development infrastructure for ET.

Our group contributes a seismometer array to the Sardinia studies, which will allow us to characterize the seismic sources and seismic wavefield in detail especially for an accurate prediction of Newtonian noise from seismic fields.

The Einstein Telescope group at University of Pisa has set up a server for data storage and Jupyter notebooks, which is being used to process seismic data acquired at the candidate site at the surface and underground [Razzano et al (2019)].

While atmospheric density fluctuations are predicted to couple weakly with an underground GW detector, this coupling strongly depends on the depth of the detector, and as long as the final choice of the detector depth is not made, gravitational noise from acoustic atmospheric fields must be considered as a potential sensitivity limitation. Important for this purpose is the study of two-point correlations of the acoustic field, which, together with the detector depth, determine how strongly acoustic fields couple gravitationally with the interferometer's test masses.

The deployment of a microphone array is currently being planned. Since this experiment requires an outdoor deployment of microphones, it is important to provide a shield against weather, which includes the detrimental influence of wind on acoustic correlation measurements. Without wind shield, the local turbulence formed around each microphone leads to local pressure fluctuations, which are uncorrelated between sensors, and which can easily override the contribution of the acoustic field.