Terrestrial gravity fluctuations due to environmental fields and moving or vibrating objects poses an important source of environmental noise in gravitational-wave (GW) detectors. This noise is known as Newtonian noise (NN) or gravity-gradient noise. Unless associated with objects, NN has a steeply falling spectrum, which makes it relevant especially at low frequencies (mainly below 30 Hz).

Current research activities are on the modeling of NN, by analytic studies as well as numerical simulations, and on the development of noise-mitigation methods, especially coherent noise cancellation.

The dominant noise sources below 6 Hz are those associated with a seismic motion that couples with the detector via two separate mechanisms. One mechanism is the mechanical transmission and results in seismic noise. Ground vibrations perturb the motion of the test masses via the test mass suspension system. Elaborated vibration isolation systems are used to suspend the test masses, significantly reducing seismic disturbances. The second mechanism results in NN. The fluctuating soil displacements and density variations (mostly due to seismic motion) create varying Newtonian forces on the test mass. This cannot be shielded in any way. A well-known cancellation scheme is based on Wiener filters. Seismic noise is mostly generated near the surface and seismic motion underground is more stable and lower. NN is expected to be approximately two orders of magnitude less underground.

In underground detectors, we can suppress Newtonian Noise from surface waves very well, but we have still to deal with NN from body waves.

We need then to understand if we can actually suppress this kind of noise. The basic idea is to cancel it out from the data by using a Wiener filter. This comprises the placement of some seismic sensors which should record the seismic field in order to reconstruct the NN affecting the test mass. Instead of placing real seismometers, we modeled a simple isotropic and homogeneous seismic field that surrounds the test mass of the detector and that is composed only by body waves. With this model, we found that with already 13 seismic sensors set in an optimal configuration we can reduce the NN by a factor 10, while we can still reach a factor 3 of reduction even with a degraded sensor configuration.

The efficiency of a Wiener filtering cancellation scheme is determined by a two-point spatial correlation. Correlation can be significantly reduced due to scattering and a seismic array consisting of a large number of seismometers needs to be deployed. The rough topography can be the source of strong seismic waves scattering. The problem of topographic scattering is partly solved by the underground construction of ET, but since scattered surface waves are not generally of Rayleigh type, they can generate displacement deeper than Rayleigh waves.

The design of a NN cancellation (NNC) system requires the modeling of correlations between environmental sensors and test-mass acceleration. Since analytic models are always too simple to represent a realistic seismic field, it is necessary to construct models based on seismic observations, and, if available, on correlation measurements between seismometers and test-mass acceleration. First analyses of data from arrays deployed inside Virgo's West-End Building (WEB) included the comparison of seismic spectra throughout the building, a study of seismic correlations, and an assessment of the stationarity of the seismic field [Tringali et al (2019)].

In subsequent studies, it was found that the spectrum of seismic NN had to be reevaluated since the recess structure under the test masses (used for the installation of the test masses) had not been taken into account. Numerical simulations showed that the recesses do indeed lead to substantial suppression of NN [Singha et al (2020)], which implied that NN will likely become significant not before Virgo's observation run O5.

A NNC system is currently being developed for Virgo's next observation run O4. Seismic arrays have already been deployed in their final configuration at the two end buildings. These array configurations are based on array optimization results previously calculated using machine learning techniques and using correlation measurements from a previous array deployment [Badaracco et al (2020)]. The optimization technique required the construction of a so-called surrogate model of seismic correlations where the few measurements form the backbone and a Gaussian process regression and interpolation techniques made it possible to quickly evaluate seismic correlations between any two points of a building. The next step is to finalize the design of the seismic array at the central building, and to program the NNC pipeline, which is planned as a low-latency, offline, process running continuously and autonomously on servers at the site. 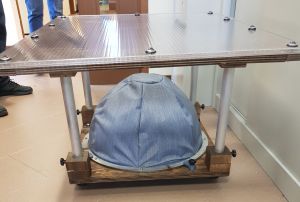 Gravity fluctuations can be associated with fields of pressure, temperature, or humidity. Atmospheric gravity perturbations are expected to be the dominant contribution to ambient NN below 1 Hz, and can still be significant at higher frequencies. The two most important questions to answer are how strongly atmospheric NN is suppressed with depth and transmission of atmospheric disturbances in the form of seismic waves into the ground.