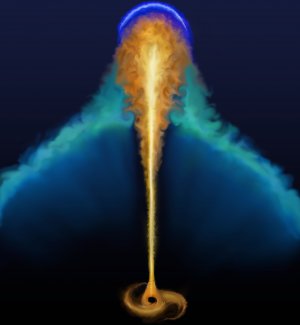 With the joint detection of GW170817/GRB170817 we had for the first time the confirmation that short GRBs are associated to the coalescence of compact binaries. Such epochal discovery opened the door for a revolutionary era for astronomy.


In our group we work on solving open issues about GRB physics, with both a theoretical and an observational approach. The jet launching mechanism, the jet structure, particle acceleration, emission and dissipation processes are all open points in the GRB field, which need to be addressed. The exploitation of multi-wavelength data from different observatories (from radio to γ-rays) is necessary to fully characterise the spectral and temporal properties of these enigmatic objects. A complete and extensive exploration of the GRB phenomenology is of cardinal importance to establish the optimal observational strategy for current and next-generation astronomical facilities, in synergy with gravitational wave observatories. The optimisation of joint detection strategies relies on the knowledge of GRB population properties, which, for the sub-class of short GRBs, is still incomplete and needs to be refined.


From the EM observation of GRB170817, it was possible to constrain the jet structure of the GRB, namely its geometry and the angular energy distribution. Such structure likely deviates from the spherical approximation due to the interaction of the jet with the post-merger ejected material. A deeper comprehension of the structure formation and the nature of the emission processes would allow us to correctly predict the EM emission at all angles and in all energy bands.


As part of our projects, we are developing theoretical tools to predict the EM emission from a structured jet, in order to evaluate the rate of joint detections that ET, in synergy with future astronomical facilities, will be able to achieve. In our treatment we include both the prompt emission component and the following afterglow phase. In this context, the transition from the prompt to the afterglow is strongly dependent on the jet structure, leading to a wide range of possible temporal behaviour of the observed flux, like the steep decay phase or the plateau phase. Such studies can test the intriguing hypothesis of a universal jet structure, which impacts on the overall properties of the short GRB population, e.g. the luminosity function, which is still poorly constrained.


We are also deeply active in the development of the science case of the mission concept THESEUS, an extremely promising wide field telescope devoted to the high energy observation of GRBs, whose role would be crucial for the future of multi messenger studies.

In coincidence with GW170817, we detected the kilonova AT2017gfo as a thermal electromagnetic transient in the visible and infra-red spectrum. Kilonovae (KN) are powered by the radioactive decay of heavy elements, whose production is due to the rapid neutron capture process in the neutron-rich matter ejected during and/or soon after the merger. In addition to binary neutron stars (BNS), also black hole - neutron (BH-NS) star mergers are expected to be a site for the production of heavy elements and the appearance of KN. To date, the origin of heavy elements in our Universe is still an open problem and the investigation of KN signals will help us in uncovering the mystery.
The next run of LIGO/VIRGO, and following runs together with Advanced LIGO, Kagra, and LIGO-India, are going to sample more and more BNS and BH-NS mergers. Moreover, next-generation GW interferometers, as the ET and Cosmic Explorer (CE), will enlarge the horizon of detectable binaries and improve the estimate of the source parameters. Moreover, many satellites and telescopes search for the EM counterparts, and next-generation telescopes will allow better measurements at higher luminosity distances. In our research group, we are involved in the theoretical modeling of the lightcurves and spectra of KN. This allows us to predict the timescales for the appearance and duration of KN in the different portions of the EM spectrum, as well as the energy evolution. These models are pivotal not only to interpret the data but also to coordinate the multi-messenger follow-up after GW events. The knowledge of kilonova spectra is expected to improve our understanding of the nucleosynthesis processes in compact binary mergers. Moreover, the improvement of kilonova models together with the detections could shed some light on the still unknown equation of state of neutron stars.


Joint GW+EM detections will also allow to shed light on the nature of the remnant, which in turn is responsible for the jet launching. Indeed, it is currently under debate whether a neutron star, as final product of a compact binary merger, is capable to create the favourable conditions for the jet collimation and ejection. The high sensitivity of future GW detectors, like the Einstein Telescope, will probe the nature of the post-merger object and pose a final answer to this issue.