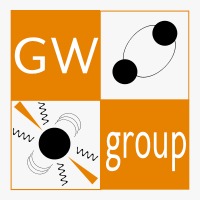 This page serves to present the work of the GSSI gravitational-wave group, which means that its content is strongly focused on the group's activities. We do not intend to provide a generic overview of research topics in this field. 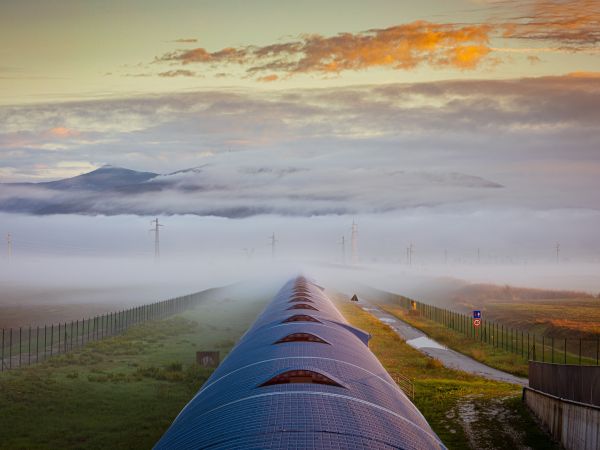 Virgo is a laser-interferometric GW detector hosted by the European Gravitational Observatory in Cascina near Pisa [Virgo homepage]. It is currently running in its second-generation configuration known as Advanced Virgo. It consists of a developed version of a Michelson interferometer with 3km long detector arms oriented at a right angle. A laser provides a high-power optical beam at a wavelength of 1064nm, which enters the interferometer with several 10W power, then experiencing two stages of resonant amplification to reach several 100kW of light power inside the interferometer arms. The light inside the arms is contained by two pairs of suspended mirrors known as test masses. Changes of the distances between test masses can be measured. Fluctuations of the light in the output of the interferometer are due to instrumental noise (thermal noise, environmental noise, laser noise, quantum noise, ...) or due to GWs. These fluctuations are observed by a photo detector, which is the prime data channel of the Virgo detector. Essential for the operation of the detector is the seismic isolation system, also known as superattentuator in Virgo. It consists of multiple stages of passive mechanical filters (pendula and cantilevers), which suppress seismic disturbances of the suspended test masses in Virgo's observation band.

Together with the two LIGO detectors in the US near Livingston (Louisiana) and Hanford (Washington), Virgo contributed to major discoveries in the past years. Its first breakthrough discovery was the merger of two neutron stars (a signal known as GW170817), where Virgo was important as a component of the detector network with LIGO for the localization of the source. This detection led to the largest multi-messenger observational campaign in astronomy with virtually all major electromagnetic observatories pointed to the source covering frequencies from radio waves to gamma rays on ground and in space and collecting rich information about the physics of the merger. Together with LIGO, Virgo has also provided decisive new insight into the population of black holes in our nearby universe contributing to the detection of a large number of black-hole mergers, which allowed scientists to test population models in galaxies and star clusters. Among these detections of black-hole mergers, a recent one (GW190521) is the merger of two unusually large black holes merging into a 142 solar-mass black hole, which belongs to the class of intermediate-mass black holes, for which we only had vague evidence so far from electromagnetic observations.

The Advanced Virgo and LIGO detectors and their upgrades are expected to operate until at least 2027 with the end of their fifth observing run (known as O5). Whether the infrastructures will be maintained beyond this date has not been decided yet. Preliminary studies have shown that these detectors could play an important role for GW science even in the era of third-generation detectors. In any case, new detectors with capabilities similar to LIGO and Virgo are on the horizon already with the Japanese underground detector KAGRA (whose commissioning has already begun) as part of the Kamioka Observatory [KAGRA homepage], and another detector in India known as LIGO India [LIGO-India homepage], which is the product of a collaboration between the LIGO project and the consortium IndIGO of Indian research institutions. The LIGO India detector is currently being constructed near Aundha Nagnath in the Hingoli district. 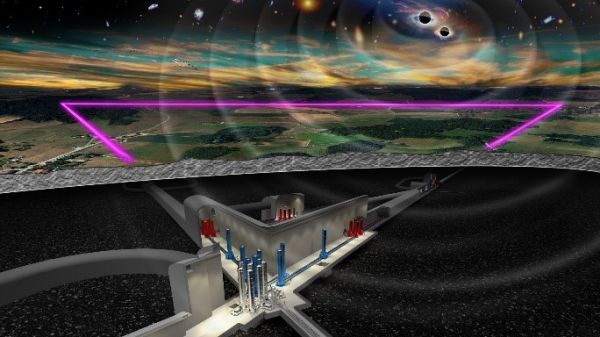 The Einstein Telescope (ET) is a proposed underground infrastructure to host a third-generation, gravitational-wave observatory [ET home page]. It builds on the success of current, second-generation laser-interferometric detectors Advanced Virgo and Advanced LIGO, whose breakthrough discoveries of merging black holes (BHs) and neutron stars over the past 5 years have ushered scientists into the new era of gravitational-wave astronomy. The Einstein Telescope will achieve a greatly improved sensitivity by increasing the size of the interferometer from the 3km arm length of the Virgo detector to 10km, and by implementing a series of new technologies. These include a cryogenic system to cool some of the main optics to 10 – 20K, new quantum technologies to reduce the fluctuations of the light, and a set of infrastructural and active noise-mitigation measures to reduce environmental perturbations.

The Einstein Telescope will make it possible, for the first time, to explore the Universe through gravitational waves along its cosmic history up to the cosmological dark ages, shedding light on open questions of fundamental physics and cosmology [ET science case]. It will probe the physics near black-hole horizons (from tests of general relativity to quantum gravity), help understanding the nature of dark matter (such as primordial BHs, axion clouds, dark matter accreting on compact objects), and the nature of dark energy and possible modifications of general relativity at cosmological scales. Exploiting the ET sensitivity and frequency band, the entire population of stellar and intermediate mass black holes will be accessible over the entire history of the Universe, enabling to understand their origin (stellar versus primordial), evolution, and demography. ET will observe the neutron-star inspiral phase and the onset of tidal effects with high signal-to-noise ratio providing an unprecedented insight into the interior structure of neutron stars and probing fundamental properties of matter in a completely unexplored regime (QCD at ultra-high densities and possible exotic states of matter). The excellent sensitivity extending to kilohertz frequencies will also allow us to probe details of the merger and post-merger phase. ET will operate together with a new innovative generation of electromagnetic observatories covering the band from radio to gamma rays (such as the Square Kilometer Array, the Vera Rubin Observatory, E-ELT, Athena, CTA).

The beginning of construction is foreseen in 2026 with the goal to start observations in 2035. Two candidate sites are under investigation: one in Sardinia and one in the Euregio Meuse-Rhine. Site-characterization studies are under way towards a site selection, which is expected for 2024. The evaluation of the sites must consider the feasibility of the construction and predict the impact of the local environment on the detector sensitivity and operation. The gravitational-wave community in the US is currently working on its own third-generation detector concepts Voyager [Voyager]and Cosmic Explorer [Cosmic Explorer] towards a future global detector network with the Einstein Telescope [3G science case].

At the Gran Sasso Science Institute, the GW group is involved in experimental and design studies of the instrument, in the development of data-analysis techniques as well as the evaluation of the science capacity of the ET detector configuration, and the group also develops the science case in combination with (potential or certain) future EM facilities like THESEUS [THESEUS], E-ELT [E-ELT], or VRO (formerly LSST) [VRO]. 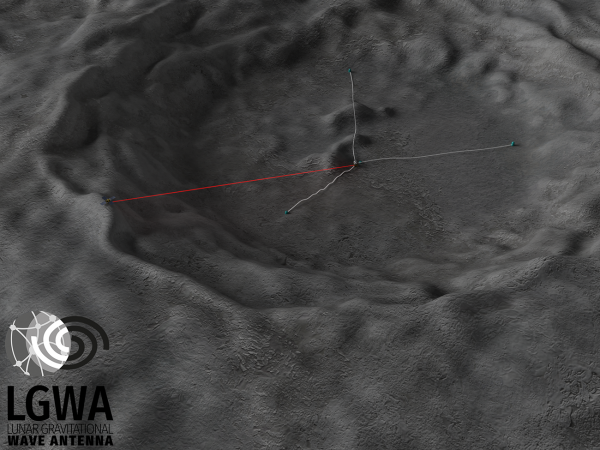 Deployment configuration of LGWA seismic array. The array resides in a permanent shadow, which requires new technologies to power the experiment. Here shown is a possible laser power beaming system.

With Apollo 17, the Lunar Surface Gravimeter was deployed on the Moon with the main scientific goal to observe gravitational waves (GWs) through the vibrations they cause of the Moon. A technical failure prevented the experiment to be carried out, and today, we believe that the gravimeter would not have had sufficient sensitivity to observe GWs. The Lunar Gravitational-Wave Antenna (LGWA) is a proposed new detector concept to make GW observations on the Moon possible in the near future [LGWA ESA lander call]. The concept is based on the observation of lunar normal modes (vibrational modes) excited by passing gravitational waves. The new key technologies to make this possible are a new generation of ultra-sensitive seismic sensors and noise-cancellation methods to reduce the background of meteoroid impacts and moonquakes. A more detailed description of LGWA and its science case can be found in a recent paper [LGWA paper].

LGWA would have an observation band that largely overlaps with the LISA observation band with some advantage at frequencies above 0.1Hz and a disadvantage below 10mHz since Moon's response at these frequencies is dominated by a few resonances and therefore cannot deliver the broadband sensitivity below 10mHz like LISA. The observable sources are still mostly the same as of the LISA detector, i.e., black-hole binaries from intermediate mass to supermassive, double white dwarfs (WD/WD), and neutron-star binaries. With its superior sensitivity above 0.1Hz, it might be able to see WD/WD mergers potentially associated with Type 1a supernovae. This is only one example of how GW observations of LGWA can lead to multi-messenger observations together with electromagnetic observatories.

Advanced LIGO and Virgo detectors started the first scientific run on September 2015, and just completed the O3 run. On the first two runs, a total of 11 GW signals have been detected: O1-O2 Catalog paper. They were all coming from the coalescence and merging of compact objects, 10 from Black Hole Binaries (BBH) and 1 from a Binary Neutron Star (BNS)

Consult the User's Guide for information on using the wiki software.